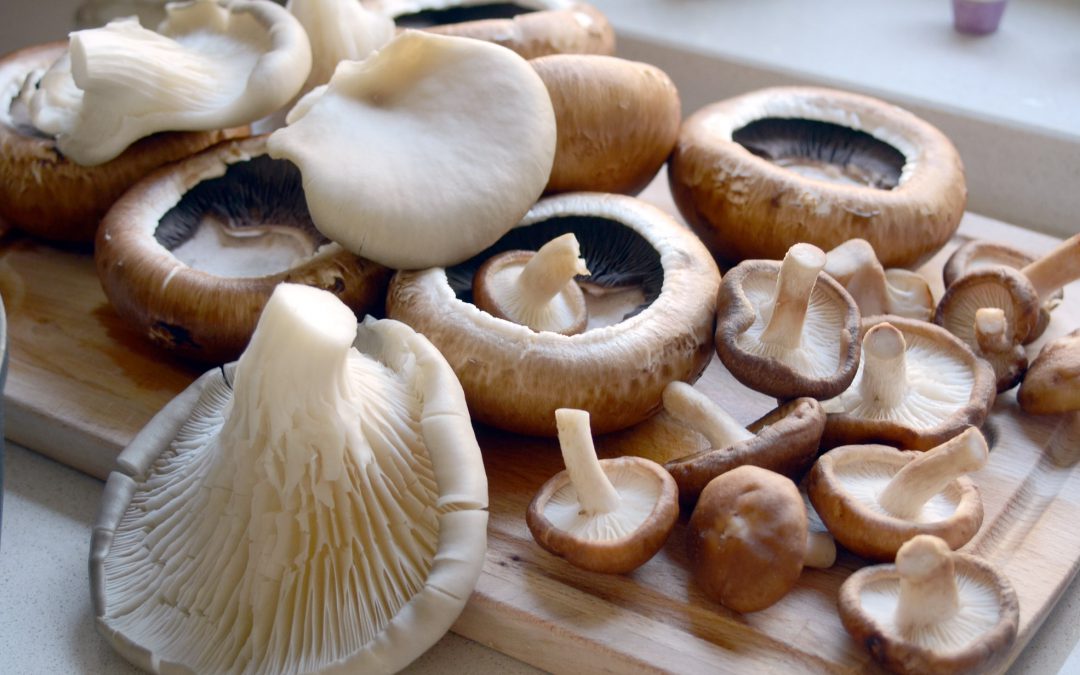 With the arrival of autumn in the northern hemisphere, the demand for mushrooms usually increases. A recent survey shows that the market had a value of $35 billion in 2015. Between 2016 and 2021, the market is expected to grow by 9.2 percent. This would bring its size to nearly $60 billion in 2021.

The biggest growth is expected in the Asian countries. Mushroom consumption in China, Japan and India is quite large. Partly because of the growing focus on healthy and organic foods, demand in these countries will continue to grow. Europe is the largest market for cultivated mushrooms, accounting for more than 35 percent of the global market. Moreover, demand is on the rise in North America, and South America is also recording an explosive growth. Meanwhile, Africa and the Middle East recorded a reasonable growth.

Demand is high all year round, but it peaks in September and November, just before the holidays. Most of the mushrooms supplied to the British market are still the white and chestnut mushrooms. An exporter says that their range was expanded two years ago with shiitake, enoki and shimeji mushrooms. The mixes of Asian mushrooms do well in the UK market. For the time being, it seems that this growth is not happening at the expense of the demand for white mushrooms.

Besides cultivated mushrooms, there is also a good market for wild mushrooms. The summer drought in western Poland, however, has resulted in a lack of supply. Exporters are therefore looking to eastern Poland and across the border into Lithuania and Ukraine to get enough volume. The season for wild mushrooms begins in August and lasts until October.

The mushroom market is now quiet, given that it is the time for the transition from wild mushrooms to cultivated mushrooms. Unlike many Western European countries, Germany has a busy summer season. Also, demand peaks towards Christmas. Besides the white mushrooms, there is also demand for exotic varieties, such as the eringi (King Oyster), shiitake, shimeji and pom pom blanc. According to the German trade association, the country expects a good season with a record production. For the first time, the total volume will exceed 70,000 tonnes, which is an increase of 3,000 tonnes compared to 2015. Of this, 63,000 tonnes will go to the fresh market. Yet, this is not necessarily good news for the sector, as prices have showed a slight downward trend, while production shows an opposite trend.

There was no summer dip in the Netherlands

The mushroom market is preparing for the busier autumn period. Traditionally, the demand falls in the summer, but that was not the case this year, so there were no price dips. The UK is traditionally a big export destination and therefore Brexit and the exchange rate have raised some concerns. Under pressure from Polish mushrooms, many companies have been forced to merge. Of the hundreds of Dutch mushroom growers in the past, there are only about 100 left. Special varieties have also been growing considerably, with chestnut mushrooms being the most important. Given the reduced supply, the price of processed mushrooms has increased substantially over the years. As regards organic mushrooms, great things are expected for the longer term, but the Dutch share is still small.

The Belgian mushroom sector has strongly consolidated in recent years. Of the more than 80 growers who were active ten years ago, there are about 30 left. The majority of them are based in West-Flanders and a smaller number in Limburg. Initially, all producers delivered to auctions, but in the late ’80s, this became less and less profitable. Many then opted to sell their products themselves. In Belgium, there are currently almost no middlemen in the mushroom sector, while in the Netherlands there are still some. Most Belgian growers are thus also traders. There is a given market price and what you earn can stand a little above or below that, depending on the quality you supply. The main competitor is Poland. In the past, Belgian retailers bought a lot of Polish mushrooms, but they now they find local sourcing increasingly important. Previously, it was all about price, now there is more attention to quality. Therefore, there seems to be less pressure on prices; a trend which is confirmed by a trader.

This year, the mushroom season recovered a month later than in previous years. Normally, the market becomes strong again in September after the traditional summer dip; however, due to the extremely hot weather in September and early October, this didn’t happen until mid-October. The demand is now seriously growing and there are likely shortages just around the corner.

Sales to the UK have been severely hampered by the 15 percent decline in the exchange rate of the pound sterling. In this market there is a lot of competition from Polish producers, because the exchange difference between the zloty and the pound is not as pronounced.

Prospects point to major shortages taking place during the holiday season in December. The main reason for this is the shortage of harvest labourers during that period.

The UK market is good for mushrooms and sales are going well. White mushrooms remain popular, but chestnut mushrooms are also working their way up. Due to the falling value of the British currency, there is a lot of pressure on the market, but that pressure does not seem to have hit the mushroom market very hard. Special mushrooms are recording some growth, but the demand for these products is still small. The growth is due to the increasing attention given to these mushrooms in TV programs. Consumers want to try new colours and textures. Some of these mushrooms are wild; others, such as shiitake and oyster mushrooms, are grown in tunnels.

With winter just around the corner, the demand for mushrooms increases, but there is stable demand all year round. Towards the Christmas season, there is a growing demand for exotic varieties. A trader of a large mushroom grower explains that 7 tonnes of specialties are delivered every week to supermarkets and wholesalers in Edinburgh and London. At present, the most considerable increase in demand is recorded by the shiitake. A producer tells that he is barely able to keep up with the demand.

For the white mushrooms, there is competition from Eastern Europe. Moreover, grow-it-yourself packs are becoming more and more popular.

Drought slows down supply in France

Cep (Boletus edulis) is a delicacy in France. However, due to the dry summer months and the lack of rainfall this year, there are fewer mushrooms in the woods this year. That means there is less volume available for the hospitality industry. The price for ceps stands at 20 Euro per kilo, almost ten times higher than that of white mushrooms, which cost between 2 and 3 Euro per kilo.

Although the supply of cultivated mushrooms is stable all year round, the peak in consumption takes place in the autumn and winter. The market is extremely stable in terms of both supply and prices and no changes are expected this year. White mushrooms are the most commonly consumed mushrooms in Italy. These cost between 1.80 and 2 Euro per kilo. Oyster mushrooms follow in popularity, with a price of between 2.50 and 3 Euro per kilo. Third and fourth are the Pioppino and the oyster, which cost 9 and 4 Euro per kilo, respectively.

In autumn, the mushrooms of the varieties Champignon and Cardoncello are grown in Sardinia. The demand falls in spring, despite the influx of tourists arriving then. Most growers produce white mushrooms. For the future, investments are planned to be made in the cultivation of Pioppino, shiitake and oyster mushrooms. In order to increase the consumption of these mushrooms, a promotional campaign will be required.

The prices in the wholesale markets of Rome and Turin range from the 1.70 to 1.85 Euro of white mushrooms to the higher prices of exotic mushrooms. In Verona, the chanterelles cost 9-14 Euro per kilo, the oyster from Veneto stand at 3.20 Euro per kilo, while the Pioppino cost 10 Euro per kilo and the porcino reaches 25.50 Euro per kilo.

US: Difficult season for wild mushrooms

The season for wild mushrooms is not looking so good. The summer was long and hot and the rain came late, according to a mushroom hunter. As a result, the available production will be smaller. The mushrooms are picked in Montana, California, Oregon and Washington. The season normally starts in August and lasts until October. How big the harvest is for the wild mushrooms is entirely determined by natural phenomena. According to a picker, the US mushroom market is a difficult one because of the lack of culinary knowledge of the population. Furthermore, the prices are high due to an import duty of 22 percent on wild mushrooms. Imports arrive from Eastern Europe and South Africa, among other places.

Agaricus mushrooms are the most cultivated in the United States. In 2015/2016, their production amounted to 461,000 tonnes. This category also includes the brown varieties, like the portobello and crimini. The share of these mushrooms is small, but growing.

Between 2013 and 2016, the market for brown mushrooms grew by 8.3 percent, while in the same period the Agaricus category recorded a growth of 4.5 percent. Brown mushrooms now have a share of 18 percent of the sector. Last year, mushrooms cost about $ 1.20 per half kilo.

The specialties category recorded stronger growth rates. Between 2013 and 2016, it grew by 36 percent, from 9,350 tonnes to 12,750 tonnes. Within this category, the oyster and shiitake have a combined share of 80 percent. The average price stood at $ 3.94 for a half kilogram, which is 40 cents higher than in the previous season.

Within the mushroom market as a whole, the share of organic mushrooms is growing. The total production in the 2015/2016 campaign reached 45,550 tonnes; an increase of 49 percent compared to the previous season. Agaricus mushrooms account for two-thirds of the organic market. In total, organic mushrooms have a share of 7 percent of the market.

The Brazilian market is growing by about 20 percent per year, according to a trader. Most of the market demand is covered with domestic production, although there are also some small imports coming from China. A producer of oyster and shiitake mushrooms explains that their wish is to grow along with the market, and therefore, they expand the acreage every year. Compared to other vegetables, mushrooms are a pricey item.

Producers in South Korea are getting bigger, so the prices are under pressure. Consequently, a trader says that they are looking for new markets overseas. The domestic market is stable, but there is still much room for exports. Europe and North America are particularly interesting markets. A wide range of varieties are grown, including oyster, enoki and shimeji mushrooms. These mushrooms are exported to the Netherlands, Germany, Switzerland, Spain, Greece, Austria, Poland, the United States, Canada, Indonesia, Vietnam and Australia. Besides the existing markets, we are also looking for new markets, such as Vietnam and Indonesia, where the demand for Korean mushrooms is on the rise.